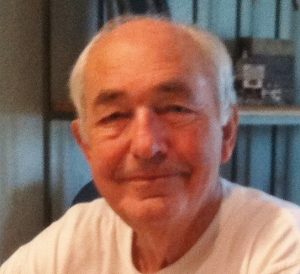 Thomas Crandall Seely, 88, died on Sunday, April 18, 2021 when his big loving
heart became too tired.
He will be sorely missed by his wife Peggy. Childhood sweethearts, they shared
the ups and downs of life for sixty-nine years, raising four remarkable kids in
the process.
An Eagle Scout, he graduated from Trumansburg Central School in 1950, served
as Quartermaster II in the US Navy during the Korean War. He lived in NY and
CT, retired to The Villages in 1998.
Tom enjoyed gardening, identifying birds, researching family history, swimming,
theater, and singing. His booming bass-baritone voice was a delight to his family
and the many audiences who applauded his prize-winning performances. He was a
member of SPEBSQSA, sang with the Cornell Glee Club and Brothers in Song.
Tom was a friendly man who adored his children, Christine Dickson (Todd),
David (Karen), Mark (Beverly), Daniel, Grandchildren Gregory, April, Joseph,
Zachary, Mark Jr. Nicole, Fin, Charlie, and seven great-grandchildren.
A Memorial service will be planned.