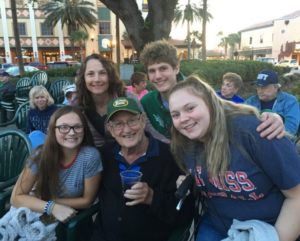 Ed was born on April 18,1934 to John and Ann Burke. He was born and raised in Detroit, Michigan. He was number four of eight children. He graduated from St. Cecilia High School In Detroit, MI. He earned a Bachelor of Science degree from the University of Detroit. He was in the Army from 1954-1956. He married Mary Anne (May) of Chicago and they adopted Kelly and Eddie from the Cradle in Evanston, IL.

Ed’s family and friends were number one. His grandchildren were the highlight of his life. Ed was known for his infectious smile. He had a love for friendly competition while playing golf, racquetball or cards. His specialty was socializing, sharing a good meal and a glass of wine or two and an animated story. Please keep these memories close to your heart.

Ed was preceded in death by his wife Mary Anne, mother Ann, father John, and brother Bob. He is survived by his two children, Kelly and Eddie (Jane), his three grandchildren Emma, Kali and Frankie, sisters Marie, Sarah, Kathleen and Margaret and brothers John and Jimmy.