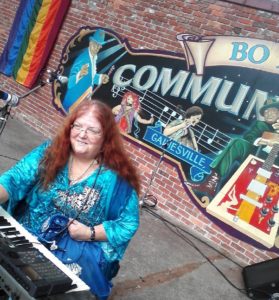 Her name was Deborah Kotler, but she was known universally as Flash Silvermoon.

She was “North Florida’s favorite psychic,” as described in a published article. She was a flamboyant character with flowing red hair and a penchant for colorful costumes which she flaunted dramatically. In fact, drama was a vital part of the essence of Flash’s life.

She was a psychic, whose readings startled her customers with their accuracy, a mistress of the tarot cards, a musician, a wiccan, a feminist, astrologer and teacher — among her many roles and talents. She could communicate with animals, to the extent that she could heal their ailments, as she healed the many people who went to her for surcease and to understand what their lives were about and what the universe had in store for them in the future.

Flash died Dec. 15 of renal failure at the age of 67. She lived in Melrose, Florida, in a home and sanctuary which she called “Moonhaven.”

Flash was nationally known as a “spiritual renaissance woman.” She hosted a weekly internet radio show called “What the Animals Tell Me.” She taught classes on tarot cards and healing techniques at the Moonhaven Mystery School of Earth Magic for Women and the University of Florida, and conducted a number of festivals and conferences, mostly for women, in the healing arts.

Her radio show was designed to bring a deeper love and understanding between humans and animals. She shared her remarkable experiences as an animal communicator, and offered everything that a person might want to know about the world of animals — from care, healing, feeding, and, most importantly, understanding.

Flash was the author of “The Wise Woman’s Tarot,” which describes the mystical power of tarot cards and includes vividly spectacular images designed to empower both women and men to use their intuition to gain greater understanding of themselves and others.

Flash was also the author of “The Planetary Handbook,” which describes the ways that astrological signs can help people understand themselves and their relation to the world.

It includes CDs of Flash’s performances of original “space music” corresponding to the astrological signs. (She was a mistress of the keyboard, drums and guitar, and had a fine singing voice.)

Flash was the author of “Lifetime Companions: Love Never Dies,” a book about her healing work with animals. It also includes her views about reincarnation of animals. “This knowledge can go a long way towards healing the pain that we all feel when we lose these important parts of our families,” she said.

Music was Flash’s first love, and it had to share space with her more esoteric pursuits. She became an expert on the keyboard, the guitar, and was a “spirited” percussionist. Her singing voice had been compared to that of Janis Joplin.

In fact, Flash claimed to have been in touch with Janis Joplin after Joplin’s death. “Janis dropped me into the deep end of the spiritual pool when she began communicating with me after her death,” she said. “And this drew me full time into a profound psychic connection that has continued to this day.”

A recent article about Flash described her relations with animals. “Animals speak to Flash directly about their behavior, needs and symptoms, and through many levels of communication,sometimes including their past life connections and incarnations. Flash is able to suggest solutions for their care and well-being that are specifically tailored to each pet’s needs.”

Flash was also writing a book about what she claimed was her past life as a priestess in the Temple of Isis. “This volume is a spiritual journey full of lessons, adventure and erotica,” she wrote. “Awaiting publication.”

Her fans were anxiously awaiting that publication.

She is survived by her Mother Flora Kotler of Monroe Township, New Jersey.