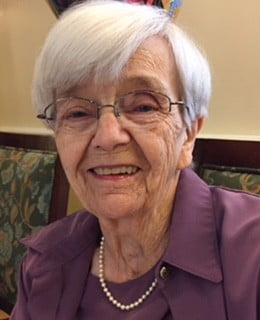 Helen Frances Saunders (Blake) passed away peacefully at Haven Hospice, ET York Care Center on Saturday, October 8, 2016, she was 88 years old. Her daughter, accompanied by her niece Barbara McCabe and her sister Patricia French of Maine, were with her during her last days. She was born March 15, 1928 in Bath, Maine, and married Edward Saunders (Ret M.Sgt. USAF) October 16, 1945. They were married for nearly 60 years, after 28 years active duty, they traveled with their RV’s all over the country.

Their home of 50 years was Panama City, Florida. She is predeceased by Edward who passed away June 1, 2005, her son’s Allen R. Saunders, DVM who passed away February 24, 2016 and Steven R. Saunders who also passed away May 25, 2016. She is survived by her daughter, Gail F. Saunders of Trenton, Florida a Registered Nurse with Malcolm Randall VA Medical Center. Roberta Pomerleau, her sister of Clinton, Maine along with many nieces and nephews and two Grandson’s Todd Allen Saunders, of Tampa, Florida and Alexander Saunders, of Tallahassee, Florida.

She was diagnosed with Alzheimer’s dementia and came to the Gainesville, Florida area in 2011 where she has resided in Assisted Living at HarborChase of Gainesville. She was well liked by all that encountered her for her delightful smile, she was a kind and loving mother despite her failing memory.