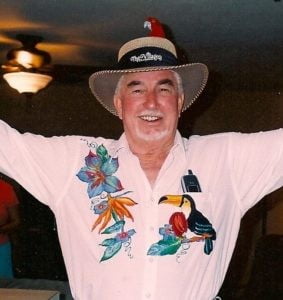 Howell Lloyd (Hal) Sumner, 92, passed away Tuesday morning, December 3, shortly after being admitted to the The Villages Hospital in The Villages, Florida.He was attended by his long time partner of 23 years, Nancy King.

Born at home on Ridge Street in Alton, Illinois on July 17, 1927, the son of Elizabeth (Thomas) Sumner and Lloyd Sumner.

Hal served proudly in the U.S.Army during WW ll and as a Sgt. in the U.S. Marine Corp. 2nd Div. during the Korean war.

Mr. Sumner was an industrial & marine lubrication sales engineer for Sinclair Oil & Metal Lubricants Co.  He became a partner in Lowe & Co. St. Louis and then founded his own manufacturing firm Sumner Oil Industries, St. Louis, Mo in 1976. Many of Boeing airliners landing gears were machined with his cutting oil fluids.

After selling his company in 1988 he satisfied a childhood passion by becoming a long distance driver of the big rigs for Yellow Freight.  He retired in 1992.

After the death of his 2nd wife Bev Lynch Sumner, he partnered with Nancy King of Alton to rehab three older homes in the Christen Hill area. She survives Hal and has been his special life partner since 1996.