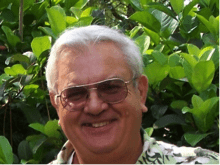 Passed away peacefully on February 12, 2018, at his home in Florida, with his wife Charlotte, son Jeff and Kacey by his side, after fighting a good fight against cancer.

Larry was born October 12, 1947 in Meyersdale Pa. to the late Ray Hubert and Phyllis (Boyer) Broadwater.

Larry was previously employed at Seven Springs Ski Resort in Pa and worked as a security guard at Daytona Speedway. He was a volunteer with the Marion County Sheriff’s Office and led the annual C.O.P.S for Tots Drive until his illness.

Larry is predeceased by his parents and special granddaughter Nicki.

He is survived by his siblings Nancy Griffith and husband Terry, Karen Maust and husband Jesse, and Kevin Broadwater and wife Robyn.

Larry’s blended family includes 22 grandchildren and 2 great grandchildren including the loves of his life Braelynn, Kiya and Kaylee.

Larry fought a long and hard battle with cancer during which he insisted on positive thoughts from all which kept him going for so long.

He would like all his family and friends to celebrate his life and remember all the good times and a get together will be planned at a later date.

Please make any donations to Hospice in Larry’s name.

Rest in peace my love.