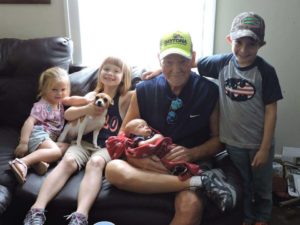 Ralph W. Radford, age 64, of Lake City, Florida, passed away on Tuesday, February 7, 2017 at Haven Hospice House after a courageous battle with cancer.

Ralph was born in Franklin, Indiana on April 2, 1952 and grew up in Trafalgar, Indiana. He later moved to Lake City, Florida, where he currently resided. Ralph worked as a truck driver for various companies until his retirement 3 years ago. Ralph leaves his daughter, Ashley Radford of Lake City, Florida, and son-in-law Robbie Woodworth; and four beloved grandchildren: Preston, age 9; Riley, age 7; Paizlee, age 3; and Peyton, age 6 months. Ralph also leaves behind his beloved mother: Rosemary Radford, one brother: Ronnie Radford, and five sisters: Rosalee Hall, Leslie Radford, Peggy Sommers, Betty Radford, and Janet Bailey; as well as numerous nieces and nephews, and close friends.  He was surrounded by a large and very close knit family that truly and dearly loved him.

Ralph was a wonderful person who enjoyed spending time with his family and friends. He was also a musician and enjoyed playing his many guitars, singing, and song writing. Ralph was a true optimist and loved life. He never met a stranger! Even during his cancer battle, he never complained.   He joked and talked with all his caregivers up to his final days of life. They were amazed at his charismatic personality, as were we all!

In lieu of flowers, memorial donations may be made to the Haven Hospice Care Center in Gainesville, Florida or UF Health Shands Cancer Hospital.